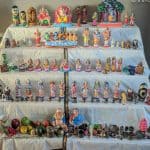 The festival season is about to begin. Yes, Navaratri is right around the corner, so before posting all the sundal recipes, I thought of sharing more about the Navratri festival, how we celebrate and also about the Golu or Kolu.

Before getting into the Golu details, let me share about Navaratri.

It is the celebration of the victory of good over evil. Nava means nine, and Ratri means night. It is the famous Hindu festival where we worship Goddess Durga, Lakshmi, and Saraswati in their beautiful forms for nine nights and on the tenth day which is the Vijaya Dasami where we offer special pooja during the day, and that marks the completion of the Navaratri festival.

Why is it celebrated?

I know there are many stories behind Navaratri and I am sharing what I learned. Devi Mahatmyam has all the details behind these stories.

Mahishasura (Mahisha – buffalo and asura – demon) the buffalo demon waged war against the Devas. He had a powerful boon that no man can kill him. When all the devas including Lord Shiva, Lord Brahma, and Lord Vishnu couldn’t defeat Mahishasura, they decided to create Goddess Durga with all their divine powers combined. Goddess Durga with all her skills battled the asura riding on a lion for nine days and killed him on the day of Vijaya Dasami – the tenth day of Navaratri. Because of this, we worship her by the name Mahishasura Mardini also – the one who killed Mahishasura. We celebrate the last day for the victory over the Mahishasura as Vijayadasami.

My MIL shared another story behind Navaratri celebrations as well – Chandi is the combined form of Goddess Parvathi(Durga/Kali), Lakshmi, and Saraswati. She is the most powerful form of Shakthi. Goddess Durga, Laksmi, and Saraswathy joined together killed the Asura chiefs Chanda and Munda and also the asuras Shumbha and Nishumbha.

To conclude, all our festivals are celebrated to rejoice the victory of good over evil. We celebrate the first three days of Navratri for Goddess Durga and the second three days for Lakshmi and the last three days for Saraswathy. And the tenth day is the Vijayadashami. 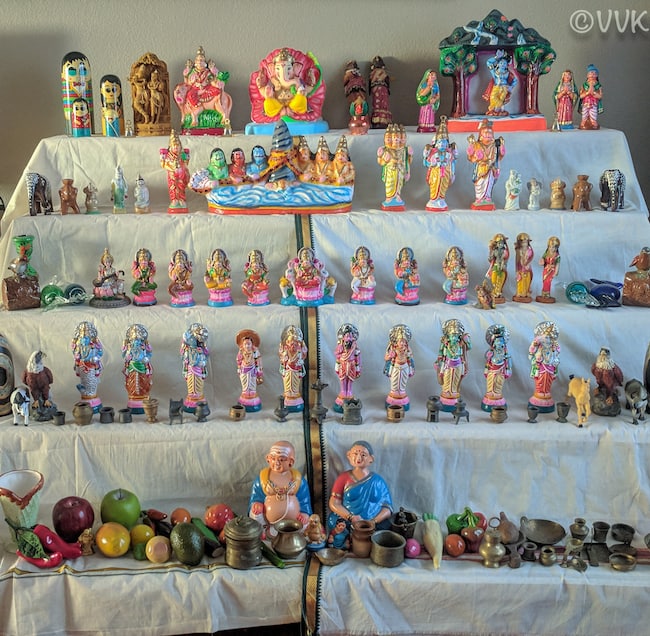 It is popularly known as Golu or Bommmai Kolu (Tamil), Bommalu Koluvu(Telugu) or Bombe Habba(Kannada). It is predominant in Tamil Nadu, Karnataka, and Andhra/Telangana. Golu is the display of dolls and God and Goddess figurines. We set up the Golu on the first day of Navratri(which usually falls on the Mahalaya Amavasya day or the next day), and we keep it until the Vijaya Dasami day. During those nine days, every evening we offer the sundal / legume stir-fry and give tamboolam to friends and neighbors. It’s a great social event as well.

The significance of Golu:

We keep golu during Navaratri to show our, gratitude to the Gods, Goddesses, our gurus and all-natural elements such as birds, animals, trees, flowers, etc.

The Arrangement and Golu Steps:

These days wooden golu stand and steel golu stand are readily available. Earlier, I used to build it with cardboard boxes. But now I have a five-step wooden golu stand. I got it from my friend here in the USA. She gave it to me before they moved to India. You can find golu steps online or you can custom-built is as well.

Golu also has significant economic aspect. It helps the handicraft industries a lot. We display the Golu in the step-like stand which is popularly known as Golu Padi. We need to have an odd number of steps and we can keep the golu steps in the counting of one, three, five, seven, nine as per our convenience. First two levels are for the Kalasam, Marapachi Bommai (a pair of male and female wooden dolls) and dolls of Gods and Goddesses. The next steps are for Gurus and then for animals and birds, followed by trees, fruits, and vegetables.

How did I accumulate my Golu dolls?

The very first year, I kept the Kalasam and few Ganesha dolls. I did buy a lot of fruits, vegetables and other decor dolls from one dollar store and celebrated my first Navratri. Even though I received Golu Dolls during my wedding, I did not bring it to the US. Over the years during every India trip, I bought and accumulated the dolls for my five steps. I did buy a few dolls from local Bay Area shops as well. Last year, I received my grandma’s 75-years-old golu doll collection. I had to give it to painting so I couldn’t bring all them here to the USA. But I was able to bring the vegetable collection, and here they are. :-)

When To Keep the Golu & Timings:

We can set up the Golu a couple of days before the Navratri or on the first day of Navratri. In our household, keeping the Marapachi Bommai and the kalasam marks the beginning of the Golu. So I usually set up my Golu the day before and on the first day of Navratri, I keep the Kalasam and the Marapachi Bommai on the first step. I make sure to not keep the kalasam during raaghu kalam time. You can check the auspicious time and the raaghu kalam in the online calendar like Drik Panchang.

I think I have written a decent essay about Navratri. If you have any questions, please reach out to me at vidhya@vidhyashomecooking.com or please comment below.

Happy Festival Season and stay tuned for some delicious kheer and sundals recipes.