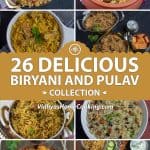 Do you love pulavs and biryanis? Then you are in the right place. I have a collection of twenty-six delicious and lip-smacking biryani, and pulav recipes all made in Instant Pot and pressure cooker. Let’s get right into the 20 plus vegetarian biryani and pulao collection list.

As I mentioned in my Zarda pulao post, this is my fifth mega marathon, and I can’t express how happy I am. A month-long marathon is always exciting and fun. April was a bit challenging, but somehow managed and completed the marathon.

Before sharing the list, I want to share my learning from this marathon and also share a tip about cooking rice in the pressure cooker and Instant Pot.

I discovered a lot of rice varieties like Gobind bhog, Sela Basmati, Kaima, kichadi rice, red samba rice, and the list goes on. I am glad that all these varieties are available now in the Bay Area itself. Every rice is different, and they add a unique flavor.

I have a lot of pulav, and biryani recipes on my blog and most of them have different cooking times. Are you wondering why? It’s all because of the rice, and I want to insist on the age-old principle. New rice becomes mushy fast, so you need less water, and you need to cook for less amount of time. But aged rice absorbs all the water, and you need to cook it comparatively longer and also it needs little extra water.

Back in India, my mom always buys aged rice and aged tamarind. I know its hard in the US as it comes in packed bags and the dates in them are quite confusing. So I always do a test run, by cooking 1 cup of rice with 2 cups of water in the pressure cooker for three whistles or cook in Instant Pot using rice preset. I check the doneness of the rice, and then I decide the timing. I hope this helps.

Ok, now without any delay here is the pressure cooker and Instant Pot pulav and biryanis.

Mishti Polao | Instant Pot Bengali Sweet Rice
Call it mishti pulao or mishti polao or Basanti polao - this Bengali sweet rice with the subtle flavors of saffron is perfect for any occasion.
Check out this recipe

No Onion No Garlic Veg Pulav | Instant Pot Recipe
A mild mixed vegetable pulav made in Instant Pot without any onion or garlic. A perfect and a sattvic recipe to make on any auspicious day.
Check out this recipe

Qabooli Biryani | Instant Pot Chana Dal Biryani
Hyderabad fame qubooli or the qabooli biryani with the goodness of Bengal gram dal but without any onion and garlic made in the Instant Pot.
Check out this recipe

Ulutham Paruppu Sadham | Black Urad Dal Pulav
A simple and a nutritious pulav with black urad dal, rice and coconut milk made in Instant Pot. Here is my take on the traditional Ulutham Sadham / Black Gram Lentils Rice without onion and garlic.
Check out this recipe

Wadi Ki Biryani | Instant Pot Punjabi Wadi Biryani
A spicy and a tangy biryani made with the potatoes and Punjabi special wadi or the spicy sun-dried lentil nuggets or fryums in Instant Pot.
Check out this recipe

Delhi Veg Biryani | Degi Biryani
Delhi Veg Biryani - The vegetarian version of the famous degi biryani with vegetables and sela basmati rice from the capital city of India - Delhi.
Check out this recipe

Eggplant Biryani
An easy-peasy biryani made in the pressure cooker with baby eggplants or brinjal and store-bought biryani masala.
Check out this recipe

Hyderabadi Veg Biryani
An aromatic and flavorful biryani with vegetables made quickly in a stove-top pressure cooker.
Check out this recipe

Idli Biryani
A quick and flavorful biryani with vegetables and leftover idlis. A great way to transform the humble idli.
Check out this recipe

Onion Biryani
A simple biryani loaded with onions, shallots and with a subtle flavor of coconut made in the pressure cooker.
Check out this recipe

Paneer Makhani Biryani
A rich & creamy pressure cooker biryani made with the delicious paneer makhani or the paneer butter masala sauce with a mild flavor of dried fenugreek leaves.
Check out this recipe

Rawther Veg Biryani | Palakkad Style
The vegetarian version of the famous Palakkad Rawther style biryani with vegetables and soy chunks made in the pressure cooker with Seeraga Samba rice.
Check out this recipe

You are invited to the Inlinkz link party!